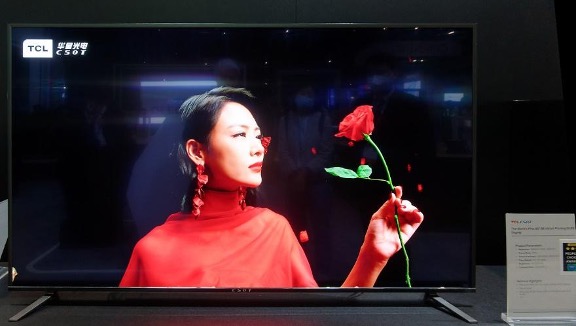 We recently published a round-up of developments in the very large TV market (100″ class). Since then, we have been to two events. The SID Display Week in San Jose and the ISE event took place in Barcelona, so we thought it was worth an update.

At this stage, such large displays are aimed at professional and commercial digital signage applications or high-net-worth individuals. For example, Sharp NEC Display Solutions showed at ISE a 120″ 8K display. The 8M-B120C has a peak output of 1,000 cd/m2 so that it can support HDR. It has a backlight with 2,048 zones to give excellent blacks. The TV will cost around $122,000 or more, so it is only for the very wealthy. It weighs 206kg/454lbs with its stand and is not easy to handle. Eyebolts enable a crane or lifting device to put it in place. Still, it’s impressive that Sharp can make such LCD panels.

At the SID Display Week Exhibition, LG Display had an awe-inspiring demonstration of a 97″ OLED EX panel. Although it was only UltraHD resolution, it had very good contrast. Of course, we thought it looked very good indeed as long as you were far enough back not to see the individual pixels. The contrast level made it almost look like a 3D display with some of the content – it was very immersive. We expect the panel to appear in LG TVs at around $25,000.

LG Display also had a 77″ 8K OLED prototype that uses a lens array to get more light from the OLED layers to come out from the front of the panel. As a result, it produced 2,000 nits of peak brightness in a 3% window which is the highest we have yet seen from a large OLED.

BOE of China, now the world’s biggest panel maker, also had some interesting TV displays at Display Week. There was a 75″ 8K panel that could refresh at 288Hz – the fastest 8K display we have heard of to date. The company also had a 110″ 8K TV that it was using to show 3D. (The increased number of pixels in 8K makes glasses-free 3D much better).

BOE demonstrated a 95″ 8K 120Hz OLED panel that uses a White OLED (WOLED) technology. That’s intriguing as, up to now, only LG Display has been making all the large WOLED panels. After the show, analysts DSCC reported that BOE has decided that it will bring the product into production for use in TVs. However, the design of the factory making the panel will only allow for low volumes. It is also expected to be expensive – probably in the same range as the LG Electronics 97″ at around $25,000.

TCL CSOT had an inkjet-printed OLED display with 8K resolution – that’s a world first. Although at 65″, it’s not an extra-large 100″ class set, if OLEDs can be made with inkjet printing, it could make it easier and cheaper to make that kind of set.

Of course, DisplayWeek is not where you can go to see finished products – we liked the description of it as the place where the people who make the products you buy go shopping for what’s next. In that case, the large and beautiful 8K displays at ISE and Display Week are a good omen for the future of very large TVs.