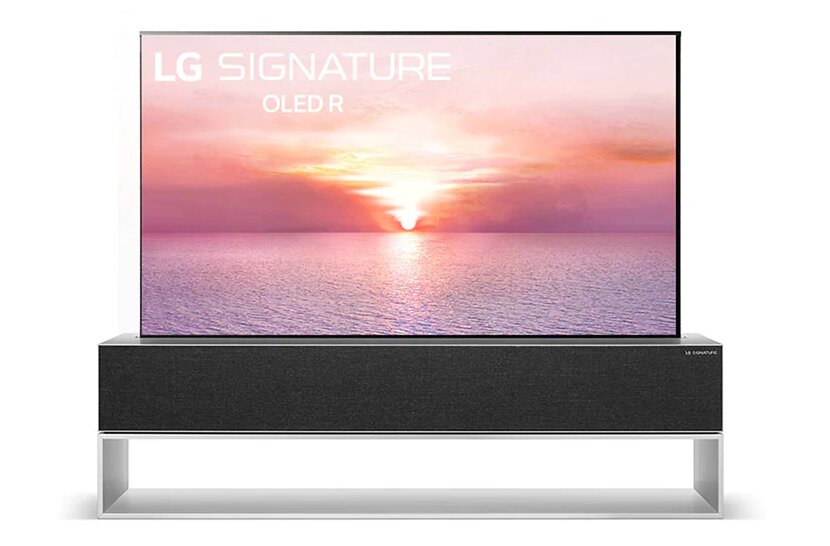 One of the joys of 8K is that you can use huge displays yet still avoid that ‘dotty’ look or ‘pixelation’ where you can see the individual dots that make up the image. The author once was late into an early digital cinema demonstration and ended up in the front row. At that time, digital cinema projectors were just 1280 x 1024 resolution – probably lower resolution than your smartphone – and the dots were very obvious. It was not a great experience!

8K can enable displays right up to 100″ or more to look really, really good. However, although 55″ and 65″ sets are incredibly cheap these days, prices start to rise, and options tend to reduce at 75″ and above.  We thought we’d look at what is happening in the market for 100″ class sets from 90″ to 110″ diagonal that could offer 8K.

Projectors are the Cheapest Way

The easiest way to get such a big display is to use a projector, but there are no native 8K consumer projectors on the market. However, JVC does offer a native LCOS-based 8K projector for a customer in the simulation market. Projectors use tiny imaging devices based on DLP, LCOS, or LCDs. These have challenges in getting down to the small pixel sizes needed for 8K, at least with the optical efficiency required to give the brightness that you would want to see. One solution to this challenge is using 4K or UltraHD imagers and shifting them rapidly to create more dots within a single frame. That’s the same technique used to create a lot of 4K projectors using FullHD imagers.

Hisense has shown, at CES this year, a prototype 120-inch “laser TV” based on projectors. (see our coverage here).  However, they are not in the market yet and will be sold in China before moving outside, possibly in 2023.

There are three candidates for direct-view 100”-class displays – LCD (in its various configurations), OLEDs, and microLEDs.

OLEDs are significantly more challenging to make than LCDs because the backplanes that control each pixel are considerably more complicated than those used by LCDs. That’s because of the way that OLEDs work, and you also have to use better quality silicon than LCDs  – all the energy for the display has to go through the transistors. 8K is a challenge for OLED because there are, believe it or not, at least 300 million transistors on the back of an 8K OLED panel! That makes them very tricky to make.  Furthermore, for 8K, you have to send the current to the pixels from the edge of the display twice as fast, so each line on the display is only addressed for half the time. That means that you need twice as much current for the same brightness, which again makes things very difficult.

Currently, the only OLED panels with 8K are available from LG Display. Samsung is still developing its 4K QD OLED panels and has not yet fully stabilized its production, so it is sticking to 4K for now. It may stick there for a while as it has limited capacity for the new technology in its new factory in Korea.

TCL has shown prototypes of 8K OLEDs made with inkjet printing, but at the moment, there is no firm date for production, according to our report.

LCD makers have been making 100″ class panels for quite a long time, partly to prove that they can (there was a ‘mine’s bigger than yours’ competition between Sharp and Samsung for some years!). LG Philips (the forerunner of LG Displays) reported making a 100″ panel in 2006.

The pixel size for an 8K is the same as a 50″ 4K panel or a 25″ FullHD monitor, so it’s not difficult at the pixel level for LCDs, although the faster drive time does present some challenges.

For OLEDs or LCDs, the key to getting an excellent and uniform image is to deliver the proper voltage for each pixel at the right time directly over the pixel through transparent or very, very fine metallic electrodes from the top edge of the display. It’s challenging to achieve that over a (relatively) long electrode from the top to the bottom of the display. Early 100″ class LCDs used drivers at both the top and the bottom to get around this, but that adds a lot of cost and complication. Still, makers have worked out how to do it now, and products are available.

However, they are not cheap. The main reason for this is the challenge of getting good yields for these panels. The same area of LCD glass with transistors can make 16 25″ monitor panels or 64 12.5” notebook panels. When you have a significant defect in the manufacturing process caused by a speck of dust or an impurity in some materials, if you are making notebook panels, you can throw away the defective one and sell the other 63. However, if you are making 100″ panels, you have to throw away the whole thing. That makes it tricky to get good production yields, so the cost goes up.

One way to get around this yield issue is to make modular displays and combine them, but nobody has successfully done that with LCDs, although several firms have tried. However, dvLED or direct view LED (to distinguish from LCDs with LED backlights) displays are made that way using either PCB modules or, in the future, using glass substrates, not very different from those used to make smartphone LCDs and about the same size. However, there are two challenges with this approach.

The first challenge is cost. Unfortunately, the cost of LED displays scales with the number of LEDs rather than the area. So an 8K 100″ microLED would cost up to four times as much as a 4K set – almost regardless of size. Now, given that the price of a current Samsung 110″ ‘The Wall’ 4K set is around $156,000, an 8K set could cost over half a million dollars!

The second problem is that it is hard to make LEDs that are small enough in pitch (the distance between the dots). There are two reasons for this. First, as microLEDs get smaller, they get less efficient, although home viewing TV brightness would probably not be a problem. You can use bigger individual LEDs, but that makes the cost higher. There are also challenges with dissipating the heat from very close LEDs. It’s better to have more space between the LEDs to absorb and radiate the heat.

If you don’t have a modular concept, 100″ is about the practical limit for sets – above that, you have real problems shipping and installing them. Any bigger, and you can’t get screens through doors and into elevators.

A few years ago, Panasonic made and sold 100″ PDPs and even demonstrated a 150″ PDP set. They used much thicker glass than LCDs, so they were cumbersome, and the logistics of shipment from the factory in Japan added a massive cost to the 100″ sets. The 150″ was just a demonstrator, and shipping it between trade shows around the world cost hundreds of thousands of dollars!

Of course, LG has a very expensive ($100,000 for a 65″!!) rollable OLED TV that could be used to deliver a 100″ set. Still, all the issues of yield and difficulty of manufacture get worse with this technology, so a rollable 8K 100″ is likely to be some years away (although, in the long term, we wouldn’t bet against it appearing!)

LCD is the Only Game in Town

For all these reasons, at the moment, LCD is the only game in town for native 8K displays, and buyers can exploit the remarkable developments in quantum dot color and backlight processing to get truly compelling displays.

Anyway, we had a look around the market at what is available at the moment and found these sets.

There is a small range of options that we have detailed in the table: