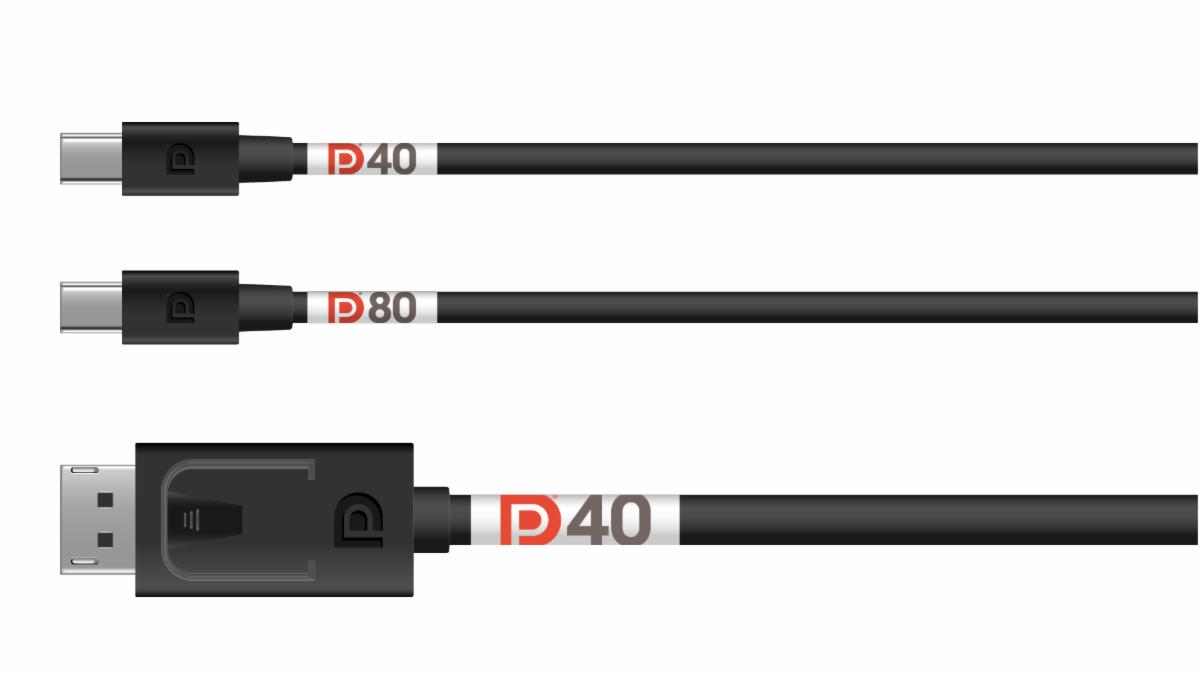 This week VESA, the PC-centric video and graphics standards organization, announced that it has a new certification program for devices (including video sources, displays and the cables that connect them) that support the DisplayPort UHBR (Ultra-high Bit Rate) feature that is part of DisplayPort Version 2.0. Why should you care if you are interested in 8K? It’s simple really.

If you want to get the best out of an 8K display connected to a PC, DisplayPort 2.0 with UHBR is a good way to do it as it supports, as it says, an ‘Ultra-high bit rate’. Put simply, the DP80 version can support 80 Gbps – that’s 66% faster than the 48Gbps available in the latest HDMI 2.1 interface that you find on the best consumer video devices (not all with V2.1 have the full 48Gbps and that causes confusion – hence the VESA initiative to try to reduce the confusion with DisplayPort – more on that later in this article). The 80Gbps means that you can run uncompressed 8K at 60Hz with no compromise on color.  In fact, the 80Gbps will allow a 10K (10240 x 4320) uncompressed signal – if there was a PC that could drive it or a display that could show it!

DisplayPort 2 supports three different UHB rates, 10 Gbps per lane, 13.5 Gbps per lane and 20 Gbps per lane. A DisplayPort interface uses up to four lanes so the maximum bit rates are 40Gbps, 54Gbps and 80Gbps, respectively. For the first level, a DP40 cable is fine, but you would need the DP80 cable for either of the other two.

VESA has, though, developed a compression system that supports ‘visually lossless’ compression (and at past CES shows I’ve seen the with and without images and, believe me, you really can’t see the difference). If you combine that ‘Display Stream Compression’ (DSC) with the UHBR technology, you can run dual 8K displays at 120Hz and with 10 bit color – which is enough for HDR. And that is without compromise to the quality of color.

(Just an aside here. The human visual system has less resolution in color than in monochrome, so video compression schemes used in TVs exploit that by throwing away some of the color information as you won’t see it, anyway. That means that, for a given bit rate or transmission method. you can show more resolution than you could if you sent all the colors of all the pixels. However, for computer graphics, rather than video, you really need all the color information, otherwise you will see some interference or distortion of the image. A rating of 4:4:4 means all the colour is there, but broadcasters use 4:2:2 or 4:2:0. If you want to dig into this technique, which is known as ‘chroma sub-sampling’, there’s a good quick introduction here.)

In fact, if you drop the refresh rate back to a (for computers) standard 60Hz, a single 80Gbps port with the DSC compression can support three 10K displays with full 10 bit 4:4:4 color. That should be enough for most people!

VESA now has a new label for cables so that buyers can know that they have a certified product and they will be available both with a full size DisplayPort connector or the smaller one. At the moment, it’s limited to cables and not systems or displays, but VESA is still talking to device makers to see if there would be a good way to label them. A complication is that over time there have already been three levels of UHBR. For now, you need to check the specification of a device or display to see what it can do.

Dedicated DisplayPort connectors are getting more unusual, as many vendors are switching to using USB Type-C with a DisplayPort ‘Alt’ mode or, increasingly, the Thunderbolt 4 connector. Unfortunately, those connectors use half the pins for other functions, so that they can’t support the DP80, although Thunderbolt 4 can support 8K at 60Hz with 10 bit color. It does that by changing the normal bi-directional connections between the PC and the display into a one way system which gives double the speed.

Tripp Lite has a good explanation of Thunderbolt 4 here.

The Thunderbolt Alt Mode for DisplayPort uses the DisplayPort lanes for one-directional transmission, whereas the PCI Express connections are bi-directional. Using a single direction for display allows more speed.

DisplayPort 2.0 was released in 2019, and it was hoped that it would see products in the market by the end of 2020, but Covid caused long delays in setting up testing. Last year, Chris wrote an article about the issue of availability and highlighted that DisplayPort 2.0 can enable new features, not just high resolution, but also, for example, VR to allow full resolution images for each eye.  It can also be used to support stereo 3D viewing.

A feature of DisplayPort that has been less frequently exploited is the ability to ‘daisy-chain’ monitors. For example, the Dell U3223QE 32″ UltraHD monitor uses LG Display’s new IPS Black technology to give better contrast than previous IPS PC monitors and has dual DisplayPort 1.4 ports. Graphic specialist, Dr Jon Peddie was impressed with the monitor.

The monitor can be used in a ‘pass through’ mode so that displays can be daisy-chained, getting around a need for docking stations if there are only limited ports on the driving PC. In other words, if you have a notebook with a single DisplayPort connector, you can connect that to the Dell monitor, then connect from that monitor to an additional one.

So, getting back to the VESA announcement, one of the reasons that the organisation is trying to establish clear labelling is that likes to compete with HDMI. HDMI 2.1a includes an ‘Ultra High Speed HDMI certification program. That means that customers buying a labelled HDMI cable can be sure that the cable supports the maximum 48Gbps of HDMI 2.1. As Ars Technica reported,  there was some consternation and confusion last year when HDMI confirmed that HDMI 2.1 had replaced HDMI 2.0, so products that were designed and made to the 2.0 specification could be labelled as V2.1. That caused confusion because because many of the features of HDMI are optional for set makers. They could re-label Version 2.0 products as V2.1 without having to update to the latest features. The options include the 48Gbps per second needed for higher resolution and refresh rates.

HDMI 2.1 can, if it supports the full 48Gbps interface and the VESA DSC Compression scheme, be used to show 8K at up to 120Hz. But you need to check with the maker, just seeing HDMI 2.1 is not enough to be sure about the bitrate support.

HDMI has some advantages in supporting ARC and eARC which allows audio from a TV to be sent back to a receiver from a TV set, a feature that DisplayPort doesn’t have, which makes it more convenient for home entertainment uses.

To try to make the situation a bit clearer, we made this table to show what specification you need to show 8K content. It gets complicated because you need more data for HDR than SDR and because DSC compression is optional in any particular device. You really have to check that a device can support what you want to do. Also note that 8K HDR video is 10-bit 4:2:0 and a 60 Hz signal can be passed by HDMI 2.1 without DSC.

(In our research for this article, we spotted that several years ago VESA announced a DP8K labelling scheme to help buyers get a cable that can support 8K with earlier DisplayPort versions. The specification looked close to the DP40 label, so we checked. It seems that the DP8K label supports 8.1Gbps per lane, so 32.4Gbps over all four lanes. VESA said that DP8K cables are likely to be able to support the 40Gbps, but it could not be guaranteed. It is guaranteed for the DP40 labelled cables.)

(Apologies, the initial version of this article reported that the Dell monitor supported DisplayPort 2.0. This was incorrect and VESA highlighted to us that, at the time of publication, there are still no DisplayPort 2 certified products).