Thanks to VRR, Your 8K TV May Be Your Best 4K 120 Gaming Display 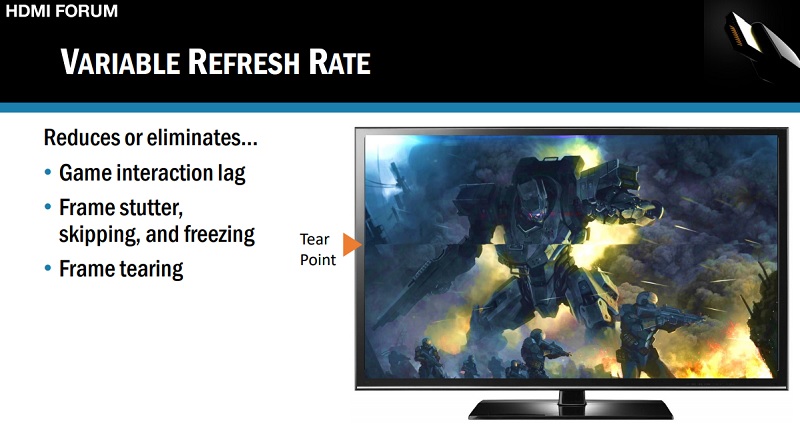 Although 8K TVs are usually designed for watching video content, it turns out that they may actually be outstanding displays for playing games at “lower” resolutions, such as 4K, but with higher refresh rates, up to 120Hz.

Traditionally, flat-panel TVs and monitors operated at fixed frame rates of 50Hz or 60Hz, depending on where in the world they were, but gamers love higher frame rates for better gameplay and deeper immersion. So, initially, the PC industry developed technologies such as Nvidia’s G-Sync and FreeSync (from AMD) to remove the stuttering and ‘tearing’ (when the computer updates the image in the middle of the display showing a frame) that was an irritation to serious gamers. In first-person shooters, it can mean death when your opponent sees you just a frame before you see them. The technology allows the gaming system to send the image frames as they are ready rather than at a fixed rate and is known as variable refresh rates or VRR. As well as varying the rate, the system allowed faster frame rates to make games more responsive.

Now that technology is coming to TVs. That’s because more recent 8K TVs, like the consoles, will support the HDMI 2.1 standard, which introduced the VRR technology to the interface. HDMI 2.1 also allowed higher bit rates to support 8K. The Xbox Series X and the PS5 each have HDMI 2.1 and can support up to 120Hz output in 4K. A helpful table at Rtings.com shows whether the tested sets support the variable refresh rate (VRR) technology that enables 120Hz support.

Rtings lists Samsung, TCL, and Hisense 8K sets that support VRR. Unfortunately, it’s not enough to simply know that HDMI 2.1 is supported. The way that HDMI works is that each revision sets out a menu of optional features, and set makers can choose whether to implement them. That can make checking the detailed specifications to ensure that all your devices work together the way you want quite a task.

Anyway, Samsung, in particular, has done a lot of work to ensure that its 8K QLED TVs work well as an 8K gaming display. The 2022 models have a specific game mode that minimizes the content latency from both local console and cloud gaming. The sets also do a great job of upscaling 4K content to match the 8K on the set, but getting the best possible upscaling inevitably takes some processing time.

A dedicated gaming mode allows faster upscaling but with less delay than the highest-quality setting. Both modes are available, so if you are playing a game that is not speed-dependent, you can enjoy the best upscaling to get the full benefit of the 8K in details and textures. However, in action games, you can enable the low latency mode to get the fastest possible response. Samsung told us at IFA that since 2021 it has boosted the number of AI cores in its TV chipset specifically to accelerate the upscaling in games.

HDMI 2.1 can also allow a supporting system and display to negotiate the Auto Low Latency Mode (ALLM) for gaming, so the user no longer needs to choose the setting.

Gamers like to feel immersed in their content, and the large size and high image quality of 8K is a real advantage as gamers may sit closer to their sets than those watching a video. It’s often said that playing games is an active ‘lean-in’ activity rather than the ‘lean-back’ of watching videos or TV. When you get closer, the real benefits of 8K become more apparent as the individual pixels are less visible than on lower-resolution sets.

Of course, TV set makers usually put all their best features, such as high-end audio, HDR, and the best processors, in their 8K sets. That means that if you have a recent 8K set, it may be the best way to experience 4K 120Hz gaming!